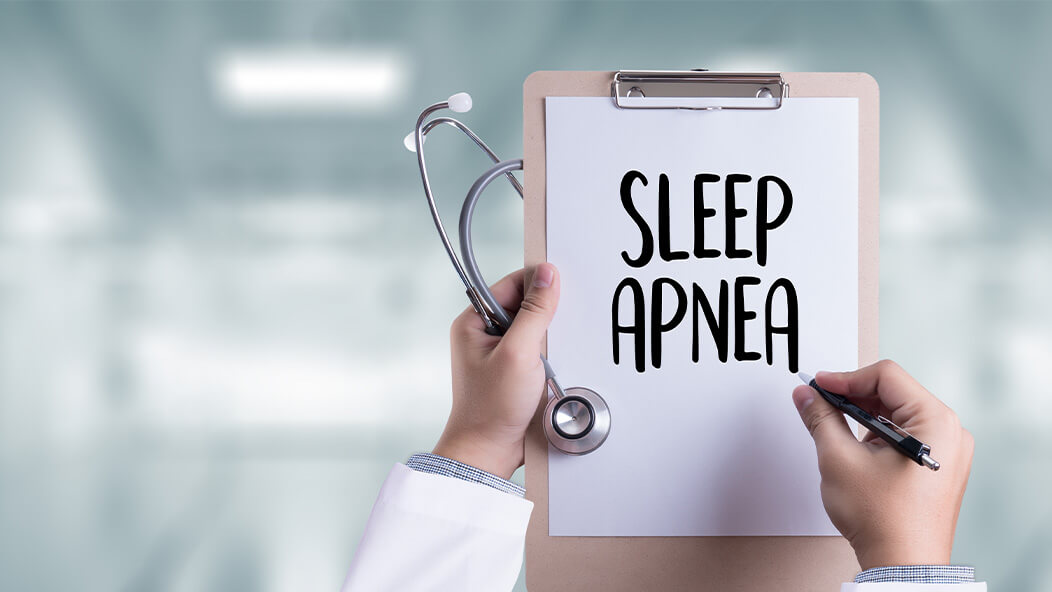 Sleep Apnea Can Be a Nightmare

If you snore, you might think keeping your partner awake is your biggest worry. But, if you have other symptoms in addition to snoring, such as waking up gasping for air, suffering from dry mouth, or being fatigued during the day despite getting a full night’s sleep, your snoring may be a sign of sleep apnea.

While loud snoring is the most noticeable and common symptom, it doesn’t necessarily mean someone has sleep apnea, a potentially serious disorder in which breathing stops and starts repeatedly while sleeping. These lapses in breathing cause poor quality sleep and lower the body’s supply of oxygen, which can lead to or aggravate serious health issues.

Sleep apnea is one of the most prevalent sleep disorders in the United States. Although it occurs in men more often than women, it can affect both sexes as well as children. While it’s likely that over 30 million adults in the U.S. suffer from obstructive sleep apnea, most of them probably don’t realize it. More than half of people over 65 are at high risk for obstructive sleep apnea, but only 8% of them are tested for it, according to a University of Michigan study.

Undiagnosed and untreated sleep apnea can cause serious mental and physical health issues. The daytime sleepiness and fatigue that result from poor sleep can leave you unable to concentrate and may cause you to fall asleep at work or even when driving. You might also become moody and depressed.

Physically, sleep apnea can cause high blood pressure due to sudden drops in blood oxygen levels, which can also increase your risk of recurrent heart attack, stroke, and abnormal heartbeat. If you already have heart disease, sleep apnea can lead to sudden death from an irregular heartbeat.

Sleep apnea is also linked to Type 2 diabetes because disturbed sleep can inhibit the body’s ability to process sugar. Those who already have Type 2 diabetes and develop sleep apnea may find their diabetes is exasperated.

People with sleep apnea are also more likely to have abnormal results on liver function tests, and their liver is more likely to show signs of scarring, which can indicate nonalcoholic fatty liver disease.

Sleep apnea can also cause issues with certain medications and general anesthesia. It can contribute to complications after major surgery for those prone to breathing problems, especially while they’re sedated and lying on their back. For this reason, anyone with diagnosed sleep apnea should make their care team aware of the condition prior to any surgical procedures.

When the airway is partially obstructed, snoring occurs. The soft tissues do collapse slightly, causing vibrations in the throat, but breathing isn’t interrupted.

In the case of OSA, the muscles relax so much that the tongue and uvula fall back completely, creating a full airway obstruction. Because air is unable to get to the lungs, breathing can be interrupted for up to one minute, until the brain becomes aware that breathing has stopped and jolts the airway clear. When this happens, it often makes the person wake up gasping for air. While breathing is paused, oxygen in the blood depletes and the heart rate slows down. 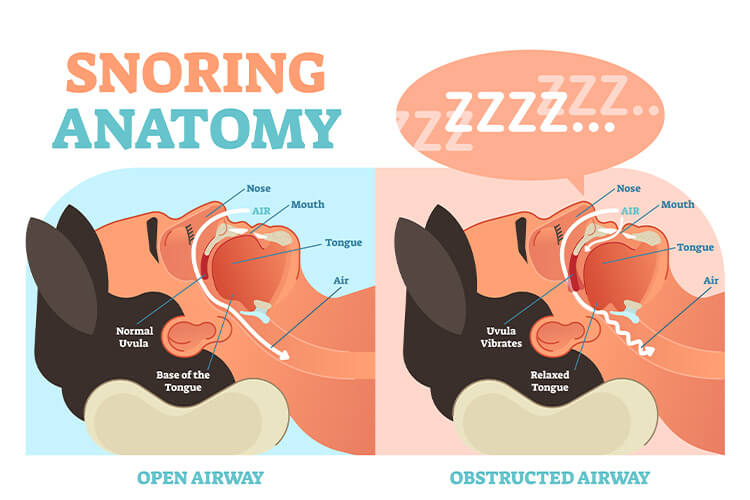 Signs and Symptoms of OSA

Since OSA occurs during sleep, you may not observe the signs on your own, or you may only be aware of the symptoms that are evident during waking hours. Nighttime symptoms might only be observed by your sleeping partner.

You may notice that you’re experiencing: 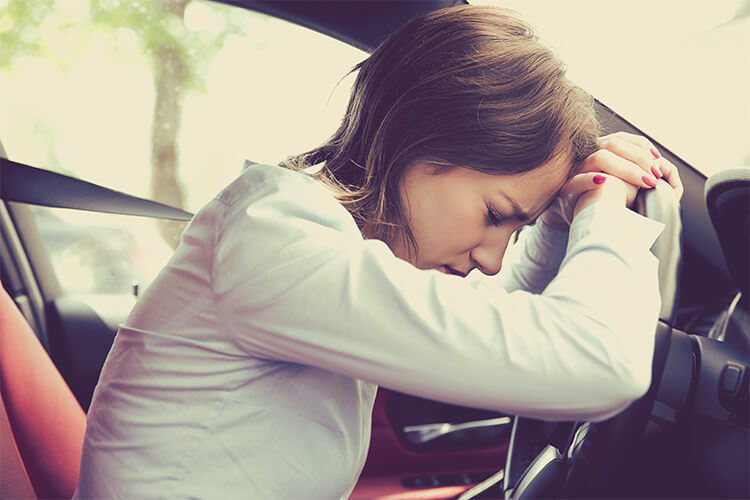 Your sleeping partner may notice that you’re experiencing:

Your risk for developing obstructive sleep apnea increases if you have any conditions that can cause your upper airway to narrow, such as large tonsils or adenoids, a large neck circumference indicating excess fat around the airway, or an enlarged tongue.

More commonly, the following factors are found in people with OSA:

A much less common form of sleep apnea is central sleep apnea, which occurs when the brain fails to send the proper signals to the muscles that control breathing, resulting in periods of slowed or paused breathing typically lasting 10 to 40 seconds.

Signs and Symptoms of CSA

Most people with CSA don’t notice that their breathing is being disrupted during sleep. The pauses in breathing are most often only witnessed by a sleeping partner or caretaker.

Some signs those with CSA may notice about themselves include:

They or their sleeping partner may also notice snoring, tossing and turning in bed, and abruptly waking up with shortness of breath. Snoring, however, isn’t as severe with CSA as it is with OSA. 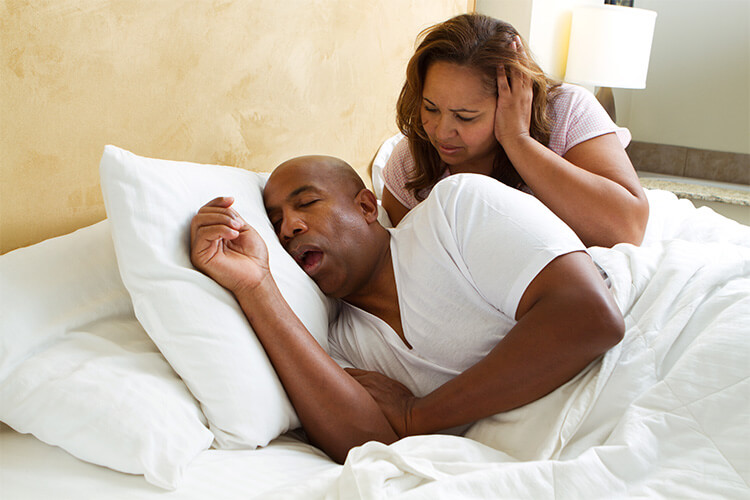 Since CSA is a neurological issue, factors such as being overweight typically don’t increase a person’s risk. However, the factors that may contribute to CSA include:

Interestingly, some people with obstructive sleep apnea develop central sleep apnea because they use a CPAP (continuous positive airway pressure) machine. Typically, the CSA subsides with continued use of the machine. In some cases, an alternative form of treatment needs to be used for OSA to avoid also developing CSA.

If you suspect you may have either form of sleep apnea, your first step should be to see your primary care physician who will discuss your options with you. You may be referred to a sleep disorder center, such as the Kelsey-Seybold Sleep Center, for a home or in-clinic sleep study.

During an in-clinic sleep study, you’ll spend the night at the Sleep Center, which is designed to mimic a home bedroom environment for comfort. Small electrodes will be attached to the skin of your head, near your eyes, and on your chest, legs, and chin. As you sleep, technicians and physicians will monitor your heart, lung, and brain activity, breathing patterns, arm and leg movements, and blood oxygen levels.

If you have a mild case of sleep apnea, you may find relief simply by sleeping on your side, losing some weight, or quitting smoking.

The most common medical treatment for moderate to severe obstructive sleep apnea is a CPAP machine, which involves placing a mask connected to a hose over your nose and mouth as you sleep. The machine then pushes pressurized air into your upper airway to prevent it from closing. However, your doctor may recommend a different type of airway pressure device, such as an auto-CPAP or a bilevel positive airway pressure (BPAP) device.

You may also find relief from a dental or oral appliance that brings your lower jaw up and forward, which helps keep the airway open.

If you’re not getting adequate rest, the first step to take toward better sleep is to talk to your primary care physician. 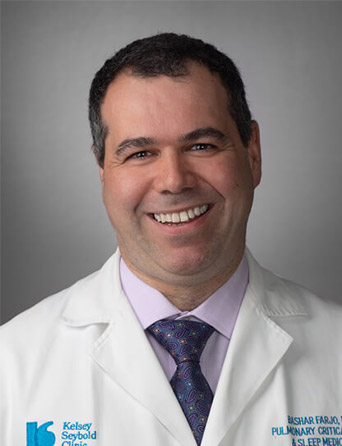