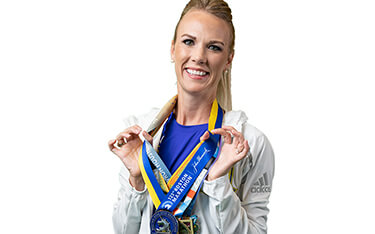 ““You’ll never have time unless you make time. You’re way more capable that what you think you are, and you can accomplish more than you give yourself credit for.”” - Stefanie Edwards, MHA, CMPE, Director, Kelsey Community Network, Pearland Administrative Offices Building

A lifelong athlete who specialized in running the steeplechase, Stefanie didn’t let a devastating injury while training for the Olympic trials steal her love of crossing the finish line. Not only did she complete her college education, get married, and begin a professional career, but she also began her family. She rediscovered her love of running and eventually completed the famed Boston Marathon only a few months after giving birth to her second son. Today, Stefanie continues to train in hopes of making a return trip to Boston.

Were you always a runner?

I was a competitive athlete throughout high school and college. My senior year in college I was two seconds off of the Olympic ‘B’ standard to qualify for the Olympic trials in the steeplechase event. When I graduated from Texas Tech University, I moved from Texas to Indianapolis to train with the Nike team. I had hoped to make the Olympic trials in the summer of 2008, which would have been the first time ever there was an event for women’s steeplechase in the Olympics. But I was injured before I had that opportunity, so I basically retired at that point and went back to school to earn my graduate degree.

When did you begin training for the Boston Marathon?

I took a break for a while, but I started running in marathons in 2012. I qualified for Boston in 2014, which meant I was eligible to run in April 2016. However, during the two-year window between qualifying and actually running in the Boston Marathon, I gave birth to my first son. I was only three months post-partum when it was time for the marathon, so I deferred. Then, I qualified to run in the Boston Marathon in April 2019, which I ran even though it was only four months after I gave birth to my second son.

How did you prepare?

Previously, as a student, my whole life revolved around running. Now I have to make running fit into the rest of my life. It was a big switch for me. I had to re-set my expectations when it came to how to be a professional, and a mom, and a wife – in addition to being an athlete. So now, sometimes training is at the top of my priority list and sometimes it is at the bottom. But it’s always on the list somewhere.

How was the experience participating in the Boston Marathon?

It was the Superbowl of marathons! It was the most amazing experience. There was a lot of camaraderie among the runners. The hills were the most surprising aspect, and I suffered some leg cramps, but it was a great time.

Do you plan to run in any other marathons in the future?

I’d like to try to qualify for the Boston Marathon again, and I can do that by running in the Houston Marathon in January 2020.

What was the biggest hurdle in this process and how did you overcome it?

Preparing for a race post-partum. When you have a new baby, they are usually your sole focus. It was hard for me to defer the first time – I was fearful that the opportunity to run in the Boston Marathon wouldn’t come around again. So, I committed myself to finishing the marathon when I got the chance to participate. There were times I would be getting up at 4 a.m. to feed the baby, but instead of going back to sleep I would just go run right then. I learned how to be resourceful and how to balance being a mom of two kids and getting in enough training.

What advice would you give someone who is considering training for a marathon?

I would say that you’ll never have time unless you make time. You’re way more capable that what you think you are, and you can accomplish more than you give yourself credit for.