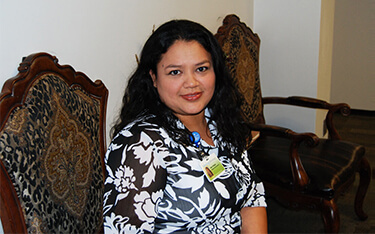 "I've always known that Kelsey-Seybold has some of the best doctors,  but now I have experienced it first hand." - Alba Villegas

"I've always known that Kelsey-Seybold has some of the best doctors, but now I have experienced it first hand."

One Employee's Heartfelt Thank You

Alba Villegas is a KelseyCare Advantage Member Services Representative who speaks from personal experience when talking about the coordinated, quality care provided by Kelsey-Seybold.

Her father, Crescencio Morales, was cared for by several of our specialists during a year-long battle with a rare and chronic heart disease called cardiac amyloidosis. He died in 2011, but Alba and her family are comforted by knowing he “could not have had a better team of doctors.”

“I've been a Kelsey-Seybold employee in various positions for over 11 years,” Alba said. “I've always known that Kelsey-Seybold has some of the best doctors, but now I have experienced it first hand.”

According to Alba, her father started as a patient in Cardiology after experiencing shortness of breath, leg swelling and other heart disease symptoms. He was diagnosed with several illnesses, one of which was cardiac amyloidosis.

“My father was estimated to have one year to survive and, unfortunately, that was the case,” Alba said.

During the course of his illness, Mr. Morales was cared for by several Kelsey-Seybold physicians. Dr. Carlos Rivera was his primary care physician, but he was also cared for by Dr. Atasu Nayak in Cardiology, Dr. Puneet Patni in Pulmonary Medicine, Dr. Tejash Patel in Hematology/Oncology, Dr. Ned Snyder in Gastroenterology, and several other Kelsey doctors during multiple episodes of care.

“I never really got a chance to thank all of these doctors for all that they did for my father. Every single one of them, along with their nursing staffs, was willing to go out of their way to accommodate my dad in every way possible,” Alba recalled. “Whether it was to work him in for a clinic visit for a sudden change of his symptoms or just calling in medications for him, they were always very helpful.”