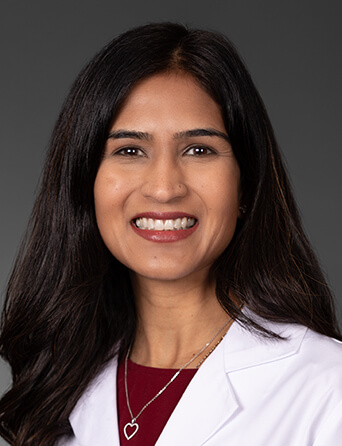 "I believe in seeing the patient as a whole, not just their cancer. My recommendations and treatment plan generally address not just how to treat their cancer, but also how to support them through the process of their treatment."

Dr. Mona Sanghani earned her medical degree at the University of California San Diego School of Medicine in La Jolla in 2003. She completed her Internal Medicine internship at Baylor College of Medicine in Houston in 2004. She completed her residency in Radiation Oncology at Tufts Medical Center/Brown University in Boston, Mass./Providence, R.I. in 2008. During that time, she had additional elective training in stereotactic body radiotherapy at The University of Texas Southwestern Medical Center in Dallas and in brachytherapy at Long Beach Memorial Medical Center in 2007.

Dr. Sanghani practiced medicine in Burbank, Calif., for several years before relocating to Houston. During that time, she worked with Valley Radiotherapy Associates in Burbank from 2008 to 2018, and then with City of Hope from 2018 to 2021 as an Assistant Clinical Professor. Her primary clinical practice site was as the Disney Family Cancer Center at Providence, St. Joseph Medical Center in Burbank, Calif., where she cared for numerous patients for 13 years and served as the Medical Director of Radiation Oncology from 2019 to 2021. She was published in Los Angeles Magazine as one of the “Top Doctors in LA in 2021.”

The best advice Dr. Sanghani has ever received is “Be nice to others because you never know what burdens they carry.”

The most amazing place she has visited is the Great Barrier Reef of Australia, where she went snorkeling.

Her guilty pleasure is chocolate and more chocolate.

Voted one of the “Top Doctors in Los Angeles” by Los Angeles Magazine, 2021