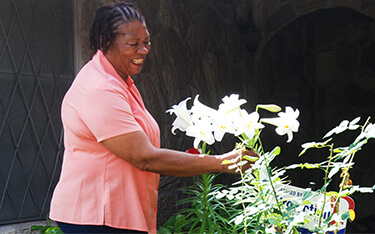 “I like being a patient at Kelsey because any doctor I need is right there.” - Lucille Barriere

Lucille was diagnosed with breast cancer in November of 2006. She had gone to Kelsey-Seybold Clinic’s Berthelsen Main Campus for her annual mammogram, like she had many times before. This time, the results were different.

“The results showed an abnormality on my left breast,” Lucille recalled. “They said they found a mass.”

Her then primary care physician told her additional testing was needed.

“They did a biopsy, which confirmed it was cancerous,” Lucille said.

Dr. James Baird surgically removed the mass, and Lucille went through 12 weeks of radiation under the care of Dr. Tejash Patel, Chief of Hematology and Oncology at Kelsey-Seybold Clinic. She remembers how scared she was before surgery.

“Dr. Baird told me he might need to remove my breast, but they wouldn’t know until the surgery started and he could evaluate the mass,” she said. “He told me not to worry. But you do worry, because you don’t know what they’re going to see when they get in there. But he explained everything to me, and that helped to calm my fears.”

When she came out of surgery and was in recovery, she was relieved to find out from her daughter that Dr. Baird had been able to save her breast.

“Thank God they didn’t have to remove it,” Lucille said.

After her treatment, she learned about the Kelsey-Seybold Breast Cancer Survivors Support Group and began going to the monthly meetings.

“They understand what I’m going through. Many of the women have been through worse things than me, and some of them are still going through it. But when I go to the meetings it’s uplifting. It gives me a feeling of calmness. It makes me forget about my problems,” Lucille said.

Lucille’s family, the support group, and her team of Kelsey-Seybold physicians, led by her primary care physician, Dr. Thomas Williamson, helped her through a second cancer scare. In October 2010, she underwent surgery again to have a lump in her other breast removed. To her relief, it turned out to be benign.

“Now, I’m back to a normal life,” Lucille said with a smile. “The only time I worry is when it’s time for a mammogram. I’m always worried they’ll find another lump.”

Lucille said she won’t consider going anywhere other than to Kelsey-Seybold Clinic for her medical care.

“I like being a patient at Kelsey because any doctor I need is right there. My family and I have been coming to Kelsey for many years. The doctors sit and talk to you. I like that,” she said.

She also likes that her team of doctors – her primary care physician, her surgeon, and her oncologist – stay connected and coordinate her care through the Kelsey-Seybold electronic medical record system.

She also wants women to know that hearing the words “you’ve got cancer” isn’t necessarily the end.