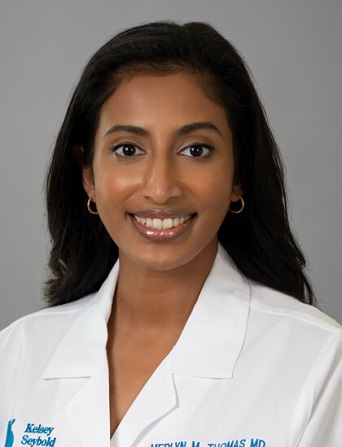 "My philosophy of care is to treat each patient as if she were my mother, sister, or daughter and to give her the attention and expertise that I would wish for them to receive. I want to provide the best care to women through all phases of their life from pregnancy to providing excellent gynecologic care. I feel it’s a privilege to focus my whole career on providing the best care to women of all ages."

Dr. Merlyn Thomas earned her Bachelor of Science in biomedical sciences at Texas A&M University in College Station in 2012. She earned her Doctor of Medicine in 2016 at Paul L. Foster School of Medicine, Texas Tech University Health Sciences Center in El Paso. She completed her Obstetrics and Gynecology residency at The University of Texas Health Science Center at Houston in 2020, where she served as administrative chief resident in her final year. She joined Kelsey-Seybold in September 2020.

Dr. Thomas is a member of the American Congress of Obstetricians and Gynecologists, the American Medical Association, and the Harris County Medical Society.

University of California, San Diego, May 2013 – August 2013, Department of Neuropsychology and Neurosciences