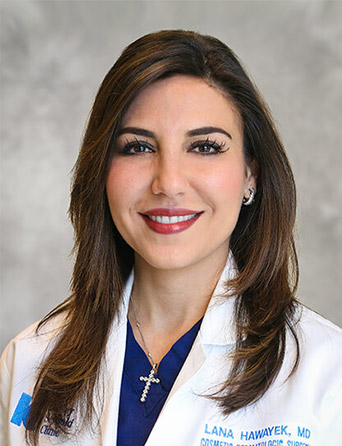 "I treat skin conditions with a passion. I believe patients should be examined and treated with the highest level of expert care. I also believe in establishing a good rapport with my patients, to be better able to understand their needs and concerns."

Dr. Hawayek's training has taken her across the globe, starting at the American University of Beirut, where she received her Bachelor of Science in Biology and went on to earn her medical degree in 1999, and completed a year of internship during which she rotated in Plastic Surgery, Dermatology, and other related specialties. She also completed a year of Surgical Anatomical Pathology.

She then enrolled at the University of Cincinnati, College of Medicine where she completed an internship in Internal Medicine, followed by residency in Dermatology, under notable chair Dr. Diya Mutasim. During this time, Dr. Hawayek was appointed chief resident in her final year. She became board certified in Dermatology in 2005.

Dr Hawayek was then accepted into a highly prestigious cosmetic procedural fellowship, where she trained with the world renowned Dr. Richard Glogau, as well as Drs. Roy Grekin and Whitney Tope, at the University of California in San Francisco and graduated in 2006 with a fellowship in Cosmetic Dermatologic Surgery and Lasers. During this fellowship, she trained in Botox injections, all the different facial fillers (Zyderm, Zyplast, Cosmoderm, Cosmoplast, Restylane, Juvederm, Perlane, Hylaform, Captique, Radiesse and Sculptra) and all the different lasers. In addition, she completed a course in Liposuction with Dr. Jeffrey Klein, as well as one in Sclerotherapy and treatment of leg veins from the prestigious Morrison Institute, in Arizona.

She has taken part in many courses and national meetings, and has spoken at several of them. A presentation dear to her heart was "The Perfect Lip," handed over by her mentor.

Dr. Hawayek loves traveling, and recently has taken up cooking, and lives in The Woodlands with her husband and daughter. She's also conversational in Spanish and French.

Dr. Hawayek has published multiple articles and book chapters on numerous dermatologic diseases, as well as served as editor on several journals.