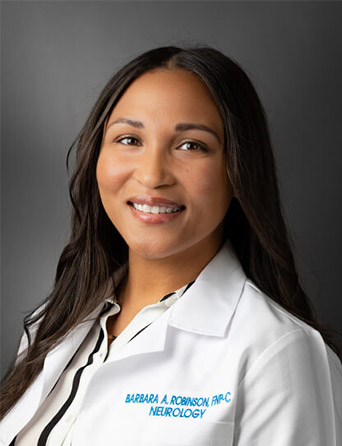 "I believe in treating patients with respect, dignity, and attention to detail. Focusing on the details and following evidence-based medicine will help to achieve optimal outcomes while following the most up-to-date and accurate research. I also strive to be sensitive to patient preferences and beliefs, as well as show compassion, respect, and understanding through active listening and attention to patients’ concerns."

Barbara graduated summa cum laude from The University of Texas Medical Branch in 2011 with a Bachelor of Science in Nursing. She then completed her Master of Science in Nursing there in 2017. Barbara has worked at The University of Texas Medical Branch as an inpatient Registered Nurse specializing in Neurology and Neurosurgery. She has also worked as an ambulatory registered nurse at MD Anderson in the Brain and Spine Center. Barbara holds a professional certification in neuroscience from the American Board of Nursing, which she successfully earned in 2014. She joined Kelsey-Seybold in 2018.
Barbara is a member of the Houston Area Nurse Practitioners and The National Society of Leadership and Success.

Barbara enjoys spending time with her husband and children. She loves traveling, sightseeing, reading, and outdoor adventures with her family. Barbara also enjoys volunteering at animal shelters and participating in fundraising runs.

Barbara went to Fiji on her honeymoon and absolutely loved it. She plans to return for her 10-year wedding anniversary.
Although most people may not know this about Barbara, she doesn’t like chocolate. And she says she’s reluctant to tell people. Nobody seems to believe her, “but it’s true!” she says.

Barbara always knew she wanted a career in the medical field. She attended the Michael E. DeBakey High School for Health Professions to gain early exposure in the medical field. It was there she discovered her passion for nursing, which eventually led to her becoming a Family Nurse Practitioner (FNP).