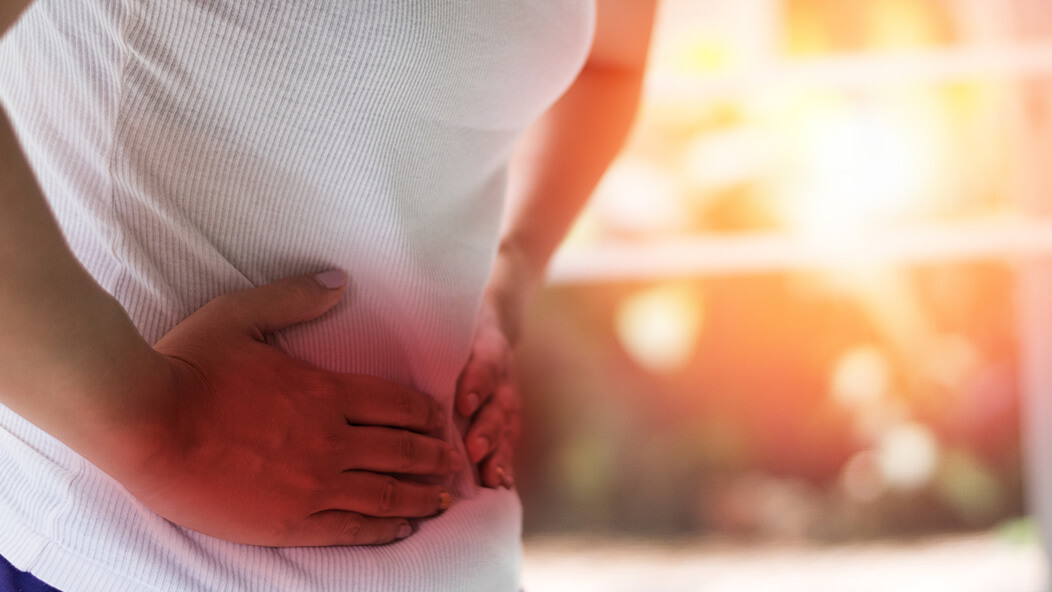 Many women have menstrual periods that cause discomfort, but endometriosis goes far beyond the occasional day of bloating and cramping. The pain women with endometriosis experience every month – and sometimes even in between periods – is severe and can be debilitating.

Normally, the endometrium, or tissue lining the uterus, is shed during every menstrual cycle. In the case of endometriosis, endometrial-like tissue also grows outside the uterus, typically around the ovaries, fallopian tubes, and pelvic tissue. It sheds during the menstrual cycle, but instead of normal menstrual bleeding, it causes small amounts of bleeding inside the pelvis, which results in intense pain, inflammation, swelling, and scarring. The scar tissue that develops, referred to as adhesions, can also cause pelvic tissues and organs to stick to each other.

Endometriosis is a common condition that affects 1 in 10 women of reproductive age. It’s usually diagnosed in women during their 30s or 40s.

The most prevalent symptom of endometriosis is extreme menstrual pain, much more intense than typical menstrual cramping. This pain, called dysmenorrhea, can begin several days prior to a woman’s period and last for several days after.

It’s important to note that some women with endometriosis don’t experience any symptoms and only learn they have the condition when they have trouble conceiving or when they have a procedure or surgery that reveals an issue.

Other common symptoms include:

Infertility is another symptom of endometriosis. Approximately 10% of women struggling with infertility have the condition, and endometriosis is the leading cause of infertility. The scarring, damage, and inflammation to the fallopian tubes caused by the condition significantly contributes to the inability to conceive. Research also suggests that endometriosis affects the number of eggs in the body and egg viability. 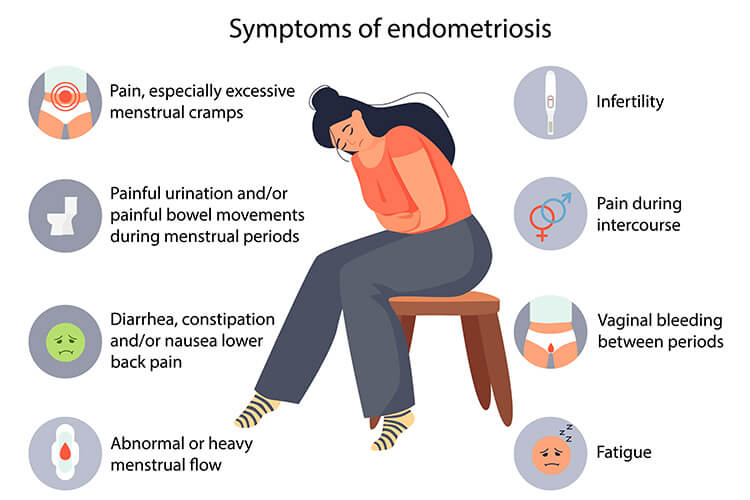 Endometriosis typically isn’t diagnosed during a routine pelvic exam, although a doctor may be able to feel cysts or scars that can indicate the condition. However, early diagnosis is critical to avoid permanent damage. So, if you’re experiencing any symptoms of endometriosis, it’s important to discuss the possibility of having the condition with your physician.

During the procedure, the surgeon makes a tiny incision near the navel. Before a laparoscope, or tiny camera, is inserted into the incision, the abdomen is filled with gas to allow for better viewing of the pelvic area. The surgeon then looks for evidence of endometrial tissue developing outside of the uterus and may also remove a small amount of tissue during the procedure to conduct a biopsy. By taking samples of tissue, your physician can determine if endometriosis lesions are present. In some cases, your physician may recommend an ultrasound before ordering a laparoscopy to get images of the reproductive organs and look for signs of cysts or scarring. 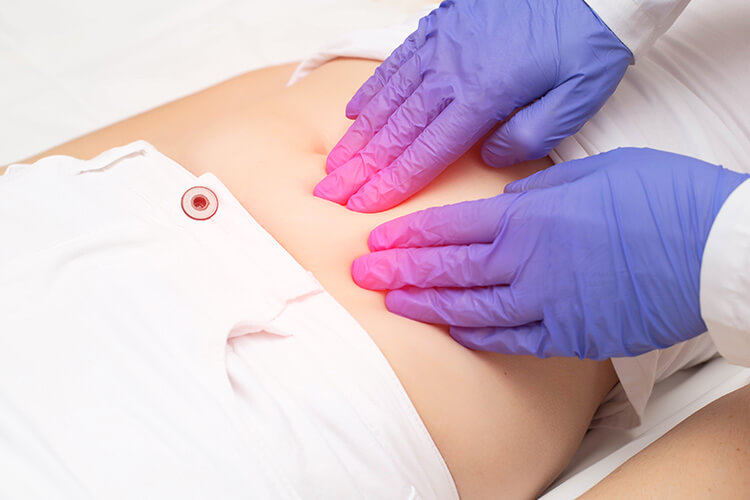 The exact cause of endometriosis isn’t known, but the following circumstances may contribute to the condition:

There are some factors that may put you at greater risk of developing endometriosis, including:

Endometriosis is typically treated with medication, hormone therapy, or surgery. Most physicians will try more conservative treatments first before recommending surgery. Your treatment plan will likely be determined by the severity of your symptoms and whether you want to become pregnant in the future. 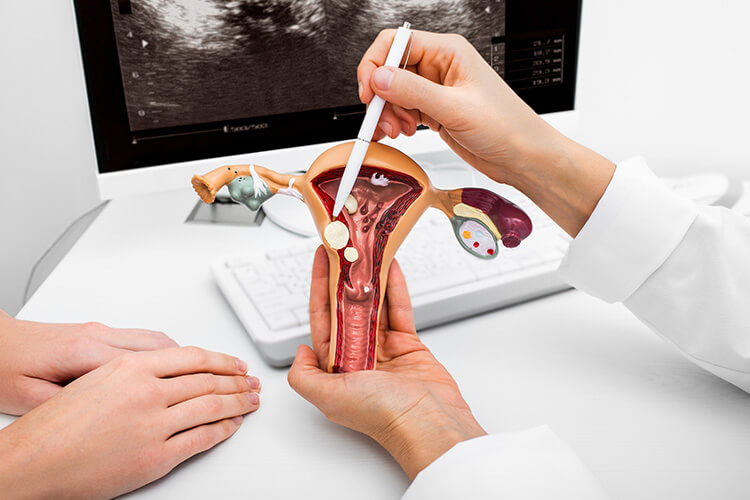 Over-the-counter anti-inflammatory pain relievers, such as ibuprofen and naproxen sodium, are usually the first step for treating the pain associated with endometriosis.

If you’re not hoping to become pregnant in the future, your doctor may suggest hormone therapy, which can reduce or eliminate the pain of endometriosis by keeping hormone levels consistent. This may slow down the growth of endometrial tissue and prevent new tissue from forming.

If you do hope to become pregnant in the future, your doctor may recommend a laparoscopic surgical procedure to remove any implants of endometrial-like tissue while preserving your uterus and ovaries, giving you a better chance of conceiving. This procedure can also reduce pain, but it does return in most cases, and hormonal therapy is usually started to help prevent new lesions.

Your doctor may recommend hysterectomy to treat endometriosis. Having the uterus removed through hysterectomy can alleviate heavy menstrual bleeding and cramping, but it’s only an option for women who don’t wish to become pregnant in the future. Hysterectomy alone (without removal of ovaries) is effective in 60% to 70% of cases.

The most effective treatment for the condition is oophorectomy (removal of the ovaries) along with hysterectomy. Removal of the ovaries results in surgical menopause, and the risks of early menopause include increased chance of cardiovascular disease and osteoporosis. For this reason, the procedure isn’t often done unless all other treatment options have first been tried. Some women continue to experience pain even after this major procedure. 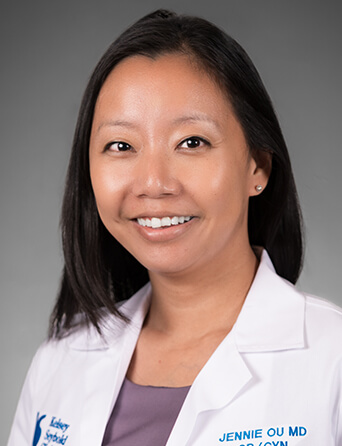 Dr. Ou is a board-certified OB/GYN specialist at Kelsey-Seybold and a Fellow of the American Congress of Obstetricians and Gynecologists (FACOG). Her clinical interests include General Obstetrics and Gynecology, adolescent health, contraception, menopause, sexual health, and LGBTQ care.
Previous Post
Next Post