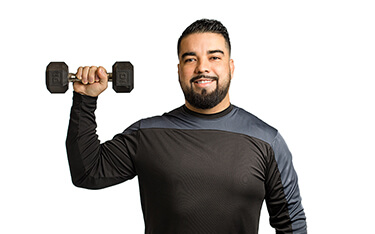 “Be patient with the results at the beginning. You’ll get frustrated and ask why you’re doing it. But keep pushing.” - Pete Salinas, Information Technology, Pearland Administrative Office Building

Wake up to better health

Pete admits he didn’t think much about his health or weight until he was diagnosed with sleep apnea a few years ago. Determined to avoid medication, he lost 20 pounds and took first place in a departmental weight-loss challenge. His secrets? He doesn’t eat a bite between 6 p.m. and 6 a.m., and he cuts his portions in half – even his mom’s delicious enchiladas.

You literally had a wake-up call that you needed to lose weight.

I’m the first to admit I’m not a fitness guy. I didn’t even really think about it until I was diagnosed with sleep apnea. The sleep study showed my brain was waking up 75 times a night. I tried a CPAP machine, and it was so uncomfortable that I couldn’t sleep. My doctor said I could either keep using it or lose weight.

So what did you do?

Rome wasn’t built in a day, so I decided to take it slow. One of the first things that helped was the internal weight-loss challenge. I saw people losing weight and wondered how they did it. Then the wheels started turning, and that helped motivate me.

How did you start to change your diet?

What are your other secrets?

Portion control works for me. I try to eat half of what I would normally eat. I still go to Whataburger, but I get a junior. If I have tortillas, I have two instead of five. I’ve tried extremes before, like salads every day, but they just don’t work for me.

Are you doing exercise?

I work out a couple of days a week. I saw a video of a retired boxer who said he worked out so he could eat. I work out so I can enjoy my weekend. If I’m going to suffer, I tell myself I can enjoy something later.

How did you get started?

I lucked out because a guy I work with is really in shape. He goes to the gym no matter what, and he lets me hang around with him. I try not to slow him down, but having someone to talk to makes it go faster. I mainly do weights and the spin bike. Nothing too crazy.

What keeps you going?

The internal challenges to see who can lose the most weight really help. Our team is very creative and that drives us. There’s a winner, of course, but everyone is happy because we all lose weight.

What are your biggest challenges?

Tamales are a killer; I love them. I used to eat 10 to 12 at a sitting. I still eat them but try to eat half as many and work out later. When my mom calls and says she’s cooked fajitas or something, I don’t want to hurt her feelings so I have to tell her that it’s not her cooking but I can only eat a little.

Give us some advice.

Be patient with the results at the beginning. You’ll get frustrated and ask why you’re doing it. But keep pushing. The first month is key. After that, you’ll gain confidence, and the snowball will start.