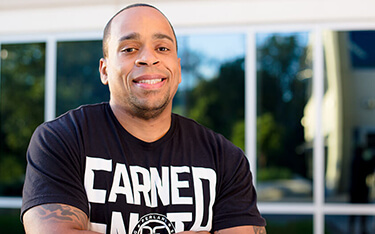 “A lot of people decide to start working out at a gym, but then in a month or two they stop. You may be sore, tired or bored but keep going.” - Nick Richmond

Nick Richmond likes the no-frills, all-in approach of CrossFit, and his workout buddies keep him motivated. Nick started working out in his 20s, but the gym routine soon got tedious. Five years ago, he started CrossFit workouts, group classes where coaches come up with something new daily. It gets his blood pumping and increases muscle mass. He doesn’t do it for the six-pack; his goal is to be able to chase after his 2-year-old daughter and live a long, healthy life.

What are your fitness goals?

I’m trying to be more fit and to avoid being the guy on 75 medications when I’m older. Also, I have to be healthy enough to chase after my 2-year-old daughter.

What does your workout schedule entail?

I work out four days a week for about an hour or hour and a half, mainly doing CrossFit. It’s basically bootcamp with cardio, strength, running, rowing and rope climbs. It’s pretty high-intensity.

It’s great because I do something different every day. I feel like it makes me stronger, and I have more muscle mass.

How long have you been working out?

When I was younger, I belonged to a gym. I did three sets of 20 reps on the weights, but that got boring. Then I heard about CrossFit in 2012 and I’ve been doing it ever since.

Do the CrossFit classes help motivate you?

It’s generally a bunch of guys and we motivate each other. I like to find the top guy and see what he is doing, then set that as my goal.

What other kinds of exercise do you do?

For a while I was boxing, and that was fun. I did a 5k every quarter for a few years, but I’ve not been doing that as much. If I get some friends together, I might try a mud run.

Which is more challenging – diet or exercise?

Definitely diet. After workouts, I’m hungry. That little palm-size serving of chicken just doesn’t cut it. I can do pretty well during the week, but then there are those two days called Saturday and Sunday!

I try to stay away from meat except for chicken -- baked, broiled or grilled. I avoid fried foods, bread and candy. I just stick with my boring meals.

What are some of those meals?

On Sunday, I meal prep for the week, and usually I make chicken or tilapia and brown rice. Then I eat that throughout the week. Breakfast is oatmeal or eggs, nothing fancy. Lunch is one of my prepared meals, and dinner is usually a protein drink.

Do you have any goals in mind?

I’m not looking for a six-pack, but I do like to hit certain numbers. I’d like to tone a bit more and work on my diet. They say fitness is 80 percent nutrition, 20 percent exercise. You can’t out   work a bad diet.

A lot of people decide to start working out at a gym, but then in a month or two they stop. Keep in mind that it took more than a day to put it on, so it will take more than a day to work if off. You may be sore, tired or bored. But keep going or you’ll deal with the after effects, like having to take pills and being tired after climbing a flight of stairs.