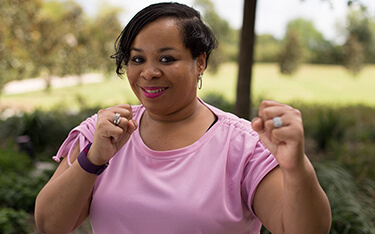 “We can change, but it’s not going to work until we get up and make it happen. That’s the only way. Just take it one step at a time.” - Dinah Thomas

When Dinah Thomas’ blood pressure and headaches spiraled out of control, she quickly went into action. Faced with the unpleasant side effects of medication, the first thing Dinah did was change her diet. Giving up sweet tea and coffee was the biggest challenge. She increased her daily activity, getting up earlier to exercise before work, and made several small changes like taking the stairs, cutting down on carbs, pork and beef, and drinking only water.

What was your wake-up call?

I started having headaches more often. One morning I got up and took my blood pressure. It was much higher than normal, so I went to see my doctor that day. My doctor said, “Your blood pressure is so high that I don’t know how you walked in here.”

How did you react to blood pressure medicine?

I took it for a month and then started coughing. The doctor said it was probably a side effect of the medicine, so I switched to another type.

It actually got worse. I don’t want to get into a trap of taking one medicine to treat the side effects of another. So I said, “This is on me.” That’s when I started trying to get healthier.

Has your husband been supportive?

Definitely. He doesn’t care for medicine and believes the body heals itself. We’re both eating better. We’ve cut out beef and pork. Some weeks we go without meat and eat beans and salads instead.

How do you find the time for exercise?

I’m an early bird and usually get up about 4:30 a.m. I watch the 5 a.m. news while I do a light workout like jogging in place and lifting weights.

Are you getting in more activity during the day?

I sit all day at work, so it’s a challenge. I have a Fitbit, and I average 5,000 steps a day by walking on my breaks, taking the stairs and parking really far away.

What are the biggest diet changes you’ve made?

I’ve cut out carbs, bread, wheat, sodas and sweet tea. I drink nothing but water. I usually have oatmeal instead of eggs for breakfast.

What was the hardest thing to give up?

My main temptation was tea with several spoonfuls of sugar, but I’ve lost my taste for it now. I have to have coffee, but instead of sugar I use sugar-free flavored creamer.

What improvements have you seen?

I’ve lost 15 pounds and I’m no longer having headaches. My blood pressure is lower.

What are your next goals?

I want to switch it up a little bit and try different exercises. There’s a park across the street from my house, and I’m going to start walking in the cooler weather. I might eventually go vegan. I want to get some vegan cookbooks and experiment with that.

What are your secrets for staying motivated?

I like to see instant results, so losing some weight is keeping me moving forward. I keep thinking, if I can lose 10 pounds, I can lose 11, and so on. My parents both had health problems, and I don’t want to follow in their footsteps.

What advice would you give to others who want to be healthier?

I’ve never been the type to exercise or worry about staying in shape. We can change, but it’s not going to work until we get up and make it happen. That’s the only way. Just take it one step at a time.