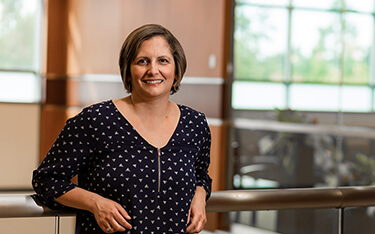 “I would tell any cancer patient who is coming to Kelsey-Seybold to trust your doctors and nurses – as well as listen to your body.” - Sarah Dill

Survivor
“I would tell any cancer patient who is coming to Kelsey-Seybold to trust your doctors and nurses – as well as listen to your body.”

Breast cancer was nowhere on Sarah Dill’s radar. She was a working mom, raising two preschoolers, without a strong family history of breast cancer. Plus, she was only 31 years old. In fact, when her office brought in a mammography truck to screen employees for breast cancer, she was told she didn’t qualify to have a mammogram because at her age; it was very unlikely she had breast cancer.

Yet, a short time later, she found herself in the Kelsey-Seybold Cancer Center at the Spring Medical and Diagnostic Center sitting across from an oncologist, being diagnosed with Stage 2B Triple Positive Breast Cancer.

Sarah initially called her Kelsey-Seybold OBGYN, Dr. Jennifer Breazeale, when she felt an unusual hardening on the skin of her left breast.

“She had me go in for a mammogram, and they found two suspicious spots,” she said.

From there, she had two biopsies that confirmed she had breast cancer. That led to her visit with the oncologist, who gave Sarah her treatment plan, which included chemotherapy, radiation therapy, and more surgery.

She underwent chemotherapy treatments at the Spring Medical and Diagnostic Center for 18 weeks, and that was followed by a mastectomy performed by Dr. Treneth Baker. Once she recovered from the mastectomy, it was time to begin 30 rounds of radiation treatments. But before she could get started, Hurricane Harvey hit Houston. Both Kelsey-Seybold employees and patients were unable to navigate the roadways due to floodwaters.

“My house flooded. I live in the Kingwood area, and we were displaced for about two months,” says Sarah. “Once the flooding receded, I started the radiation treatments. We would drive to my appointments from our temporary housing, which was a hotel. Later, we were able to move into the second floor of our home while the downstairs was being renovated. It was very stressful.”

Despite the rocky start, Sarah ended her radiation treatments after 30 rounds. She took maintenance Herceptin infusions as a part of her post-care for a year following her treatments.

Six months after radiation treatments ended, she was a candidate for reconstructive surgery.

“I opted to do a second mastectomy to take the ‘healthy’ breast, in hopes of reducing the risk of me getting breast cancer later in life since I was so young,” she says. “My surgeon reconstructed my breasts by taking tissue from my stomach.”

Sarah’s husband stood by her side during her entire experience – he drove her to every treatment session and was present for her surgeries. Grandparents were available to help care for her then 2- and 4-year-old children so she could focus her energy on resting and getting well.

Her Kelsey-Seybold physicians called to check on her frequently, including her oncologist.

“He was always kind, calming, and thorough,” she says. “I would tell any cancer patient who is coming to Kelsey-Seybold to trust your doctors and nurses – as well as listen to your body. The staff continuously had very quick responses to anything I needed or questions I had. Take it easy and let them do the worrying for you because they’re very compassionate and care about the outcome as much as you do.”

Sarah summed up her experience at the Kelsey-Seybold Cancer Center as “life-changing.”

“It was life-changing in both good and bad ways,” she explained. “Breast cancer was hard to go through – my perspective on life changed, but the experience also allowed me to come into contact with some wonderful people. I saw how great people can really be. In the end, I could not have been happier with my care.”