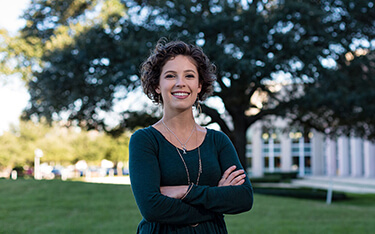 “I was a biology major and was going to go into pharmacy, but I think I'm going to apply to nursing school. I'd really like to be a chemo nurse.” - Kaylyn Hale

Lymphoma Survivor
When she got to ring the ceremonial bell indicating the end of her treatments, the entire family wore one of the customized shirts they became known for throughout the Kelsey-Seybold Cancer Center. It said, “Ring the bell and run like Hale!”

It was an exciting time in Kaylyn Hale’s life … she had graduated from high school and was in her first year at Texas A&M University. However, not long after arriving on campus, the then 19-year-old student began experiencing some mysterious health symptoms.

Kaylyn started itching, and it did not let up throughout her freshman year, despite numerous trips to the doctor.

“I'd been itching for a whole year, and I'd gone to four or five different doctors,” she said. “In May, I was at a concert, and my neck swelled up really big.”

With her neck swollen, Kaylyn immediately went back to the doctor. The physician recommended a PET scan followed by a scheduled biopsy of her lymph nodes. While in the waiting room for the biopsy, Kaylyn received a phone call from her physician informing her they had already made a diagnosis – she had Hodgkin’s lymphoma, a cancer of the lymphatic system.

“It was frightening to get that news, but it was also kind of a relief after having itched for so long,” she said.

Kaylyn’s family had just joined Kelsey-Seybold health insurance, KelseyCare, so not only were they navigating through a new medical system – they were doing so with a serious illness.

“Not really knowing any of the doctors or anything, it was a little frightening, but everybody made us feel comfortable,” said Leslie Hale, Kaylyn’s mother.

After her diagnosis, Kaylyn immediately began six months of chemotherapy treatments, followed by radiation therapy. She didn’t return to Texas A&M, but instead took a class at San Jacinto Community College so that she could stay close to home and family while undergoing her treatments.

“I have a large family and we're all very close. The Kelsey-Seybold staff always let us all come to the doctor appointments,” said Leslie.

Kaylyn added, “There were about eight to 12 of us every time!”

The family always showed up in matching shirts featuring slogans to encourage Kaylyn during her battle with cancer. That support helped her get through hair loss, ‘chemo brain’, and all the additional side effects of cancer treatments.

Kaylyn’s siblings also did their part to support their sister. When her diet was restricted, they also refrained from eating those restricted foods … at least in front of her. Kaylyn also liked to go to the gym when she felt up to it and her aunt went along with her.

Kaylyn’s cancer treatments ended just before Thanksgiving – perfect timing because her faith was tested during her battle with cancer, but she and her entire family were thankful that she completed her treatments in time to celebrate the holiday.

When she got to ring the ceremonial bell indicating the end of her treatments, the entire family wore one of the customized shirts they became known for throughout the Kelsey-Seybold Cancer Center. It said, “Ring the bell and run like Hale!”

“I was a biology major and was going to go into pharmacy, but I think I'm going to apply to nursing school. I'd really like to be a chemo nurse,” she said.

Kaylyn will have to closely monitor her health for the remainder of her life, but if she becomes a nurse, she’ll have a personal experience to reflect on as she takes care of her future patients.

“The people at Kelsey-Seybold used to tell me that just seeing me made them feel better and I made them happy. I’d like to help people the way they helped me,” said Kaylyn.