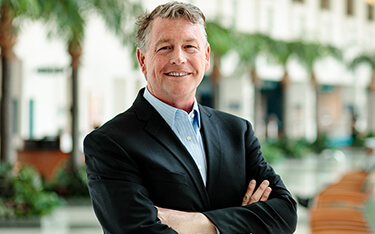 “The cancer was diagnosed, and a treatment plan was formulated within 36 hours. I believe this quick response was a lifesaver.” - Joseph Voss

"I’m a totally bought-in evangelist. I tell everybody that I believe this program is one of the greatest values in healthcare – and it saved my life."

When abdominal pain sent Joseph Voss on a late-night visit to an urgent care center six years ago, testicular cancer wasn’t even on his radar.

After all, he was healthy and active. Besides, this type of cancer typically is a young man’s disease, and Joseph was 50.

It all started with what Joseph thought was a minor gastrointestinal problem. But after several days of taking medication and watchful waiting, he felt no better. When the pain kept increasing, Joseph sent a concerned late-night text to his physician, who was part of the Kelsey-Seybold Executive Health Assessment program. Joseph is a tech company executive based in Austin, Texas.

“My doctor immediately texted for me to go to an urgent care center affiliated with Kelsey-Seybold and let them take a look,” Joseph said. “I had no clue I had advanced cancer.”

After a night of tests, Joseph learned the culprit was stage 3 testicular cancer that had metastasized (spread) to his lower back, causing the abdominal pain. Just a few hours later, Voss met his oncologist, Dr. Tejash “TJ” Patel, Chief of Hematology and Oncology at Kelsey-Seybold.

Without wasting a minute, they discussed the treatment plan and scheduled surgery. Treatment began the very next day.

“It was a rapidly growing cancer, so timing and focus were of the essence,” Joseph said. “The cancer was diagnosed, and a treatment plan was formulated within 36 hours. I believe this quick response was a lifesaver.”

Wiping out the cancer took several surgeries – the first to remove the original cancerous organ and others to take out surrounding lymph nodes. In addition, Joseph received six rounds of chemotherapy at Kelsey-Seybold’s Cancer Center.

Joseph was pleased with every aspect of the care he received at Kelsey-Seybold. In particular, he was impressed with Dr. Patel’s personable manner, expertise, and intelligence.

He said Dr. Patel treated him as a partner in treatment, not just a patient.

“As patient, no one is going to solve it all for you,” Joseph said. “You need to be as knowledgeable as possible. Dr. Patel was willing to listen to my opinion, and we worked together to customize the best possible plan.”

Joseph spent a week in the hospital, and recovery lasted several months, including five months of chemotherapy.

“Everyone at the hospital was incredibly positive, and it’s a very comfortable facility,” he said.

Joseph said he tried to approach the experience from a healthy perspective, including staying in touch with family and friends via social media. Although he had his rough moments, he said he never doubted he would make it.

Now that he is cancer free, Joseph returns for annual follow-ups. His prognosis is good, and the risk of recurrence decreases each year.

In 2013, one year to the day after completing initial chemotherapy, Joseph participated in the MS 150 bike ride from Houston to Austin. He enjoyed it so much he did it again the next year and the next. He bicycles or runs daily, and last year he ran the Disney Marathon.

But, he said, surviving cancer gave him a new perspective on life.

“I emerged from it saying, ‘This is absolutely a second chance,’” he said. “I know it sounds strange, but in a way I’m thankful for the opportunity to experience it. Without cancer, I wouldn’t have been tested on this level, and I wouldn’t have gained the appreciation I now have for life.”