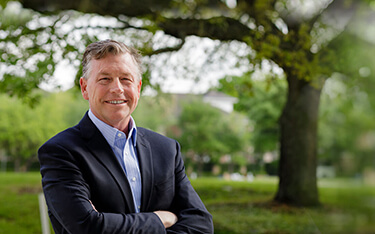 “I’m a totally bought-in evangelist. I tell everybody that I believe this program is one of the greatest values in healthcare – and it saved my life.” - Joseph Voss

"I’m a totally bought-in evangelist. I tell everybody that I believe this program is one of the greatest values in healthcare – and it saved my life."

As a busy executive, Joseph Voss knows the value of time and teamwork. That’s why he credits the one-two punch of the expedited, coordinated care from the physicians in Kelsey-Seybold’s Executive Health Assessment program and Cancer Center with saving his life.

Since he started seeing Dr. Robert Dickinson in the Executive Health Assessment program 10 years ago, Joseph has faced his share of health issues. But he’s always been impressed with the program’s concierge care and direct access to doctors.

“I’m a huge believer in staying on top of my health,” said Joseph, 56, a tech company executive based in Austin, Texas. “At Kelsey, I get the maximum level of expert care with minimum time and effort on my part. Even though I’m no longer living near Houston, I still find great value in basing my care out of Kelsey-Seybold due to their capabilities, as well as their being part of the Greater Houston medical community. I have said in the past, and still agree, that when it comes to healthcare, Houston, Texas, is the world leader.”

And Kelsey-Seybold’s personalized, efficient approach has made all the difference in maintaining this perspective on care.

Six years ago, Joseph had what he thought was a minor gastrointestinal problem. But when the pain became unbearable, he sent a late-night text to Dr. Dickinson, who advised him to go to an affiliated urgent care center.

After a night of tests, Joseph learned the culprit was stage 3 testicular cancer that had metastasized (spread) to his lower back.

A few hours later, he met his oncologist, Dr. Tejash “TJ” Patel, Chief of Hematology and Oncology at Kelsey-Seybold. They discussed the treatment plan and scheduled surgery. Treatment began the very next day.

“It was a rapidly growing cancer, so timing and focus were of the essence,” he said. “The cancer was diagnosed and a treatment plan was formulated within 36 hours. I believe this quick response was a lifesaver.”

Joseph was impressed with Dr. Patel’s expertise and felt he treated him as a partner.

“Dr. Patel is so personable and intelligent,” he said. “He was willing to listen to my opinion and consider different approaches, and we worked together to customize the best possible plan.”

To get rid of the cancer took several surgeries – the first to remove the original cancerous organ and others to take out surrounding lymph nodes -- plus six rounds of chemotherapy at Kelsey-Seybold’s Cancer Center.

Now that Joseph is cancer free, he returns for follow-ups. Initially his follow-ups were every three months, but he has now graduated to annual check-ups. His prognosis is good, and the risk of recurrence decreases each year.

Joseph believes the cost for extended, one-on-one consultation with his Executive Health physician is worth every penny.

“I’m a totally bought-in evangelist,” he said. “I tell everybody that I believe this is one of the greatest values in healthcare – and it saved my life.”

Joseph said the consultation fee is miniscule compared to the personalized concierge care he receives. In addition to ongoing access to physicians and expedited, coordinated care, the staff is respectful of his time.

“Kelsey-Seybold spoils you,” he said. “I appreciate that they know my time is valuable, and the attentiveness of the doctors minimizes my worry. Also, Kelsey-Seybold’s healthcare delivery model is so well-designed and executed, they maximize the attention on delivering healthcare without undue waiting or worry. For most patients, the worst part is waiting to see a doctor, waiting to hear back on test results, or waiting on treatment. Kelsey-Seybold is truly unique in serving patients and reducing unnecessary delays or concerns.”

In 2013, one year to the day after completing initial chemotherapy, Joseph participated in the MS 150 bike ride from Houston to Austin. He enjoyed it so much he did again the next year and the next. He bicycles or runs daily, and last year he ran the Disney Marathon.

Surviving cancer, he said, gave him a new perspective on life.

“I emerged from it saying, ‘This is absolutely a second chance,’” he said. “I know it sounds strange, but in a way I’m thankful for the opportunity to experience it. Without cancer, I wouldn’t have been tested on this level, and I wouldn’t have gained the appreciation I now have for life. And I have Kelsey-Seybold, their doctors, and their other team members, to thank for providing outstanding care.”