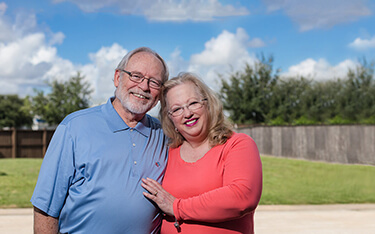 “We get treated quicker...heal faster and with less complications because Kelsey is more informed.” - The Prater Family

"We get treated quicker...heal faster and with less complications because Kelsey is more informed."

From general to specialized diagnoses, you're in good hands
Meet Our Internists

Doug Prater and his wife Valerie had just picked up their dogs after returning from a trip when Doug began experiencing severe indigestion and other symptoms that wouldn’t go away. He told his wife he needed to schedule a doctor’s appointment. She decided not to wait and called Kelsey-Seybold’s After-Hours Nurse Hotline. The registered nurse on the line calmly directed them to go to the nearest emergency room. When the Praters got there, an exam showed a 99 percent blockage in one of the arteries in Doug’s heart. Instead of dying from a heart attack, Doug was treated and is alive today thanks to Kelsey-Seybold’s experienced, quick-thinking After Hours nurse and her advice.