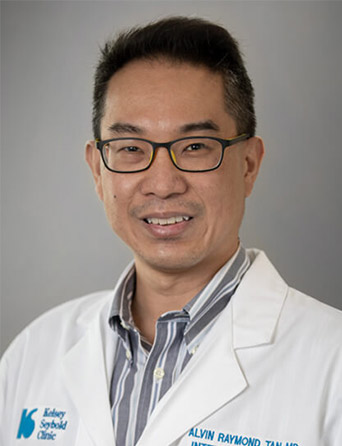 "I firmly believe that the key to a successful partnership between patient and physician is mutual respect and good communication. In the end, our goal should be the same, which is to keep the patient healthy, so teamwork is important."

Dr. Alvin Raymond Tan earned his Bachelor of Science in biology at the University of Santo Tomas College Science in the Philippines in 1991 and his Doctor of Medicine degree in 1995. He did his internships at Cardinal Santos Medical Center in the Philippines from May 1, 1995 to April 30, 1996 and at Metropolitan Hospital Center, New York City from July 1, 2002 to June 30, 2003. He completed his Internal Medicine residencies at Cardinal Santos Medical Center, Philippines, where he was chief resident, in December 2002 and at SUNY Upstate Medical University, Syracuse, N.Y., in June 2005.

Dr. Tan also completed fellowship training in Nephrology in 2007 at SUNY Upstate Medical University, and in Geriatric Medicine in 2008 at New York Hospital Queens in New York. He practiced Internal Medicine and Nephrology in the Philippines for 8 years and then at the Medical Center in Houston for 4 years. He joined Kelsey-Seybold in September 2020.

Dr. Tan is a member of the Texas Medical Board and the National Board of Physicians and Surgeons.

Dr. Tan spends most of his free time with family and loves to travel and explore the world. He enjoys cooking and reading, and indulges in Marvel/DC comic books. Watching TV/movies and building LEGO sets relaxes him after work. He’s also an avid NBA fan.

The best advice Dr. Tan has ever received is: “Treat others the same way you’d like to be treated.”

The most exotic place he has visited is Iceland. His guilty pleasure is collecting vintage toys/robots/LEGOs.

The Spectrum of Thrombotic Thrombocytopenic Purpura. A Clinico pathologic Demonstration of Tacrolimus-Induced TTP in a Patient with Lung Transplant.Competition in Math, Science, and Technology Regional and National Finals. Nov-Dec 2006.