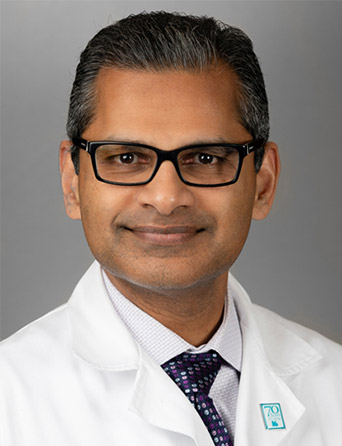 Dr. Rajkumar Alagugurusamy earned his medical degree in 2002 at St. George’s University in Granada, West Indies. He completed his Internal Medicine internship at State University of New York (SUNY) – Brooklyn in 2003 and his residency at the John P. and Kathrine G. McGovern Medical School at UTHealth in Houston in 2005.

Dr. Alagugurusamy has worked in a variety of positions over the course of his medical career. Prior to joining Kelsey-Seybold in 2008, he cared for patients as a locums hospitalist at St. Francis Hospital-Federal Way in Washington; Marin General Hospital in Greenbrae, California; Dominican Hospital in Santa Cruz, California; American Physicians Inc. in Phoenix, Arizona; Middlesex Hospital in Middletown, Connecticut; and VA Medical Centers in Ocala, Florida, San Francisco, California, and Anchorage, Alaska.

The best advice given to Dr. Alagugurusamy is “treat your nurses and patients well” and “apply to Kelsey-Seybold Clinic.”

The most exotic place he’s resided is Anchorage, Alaska, where he lived for three months in the winter. The most interesting place he’s visited is Siem Reap, Cambodia.

Dr. Alagugurusamy’s favorite book is A Confederacy of Dunces by John Kennedy Toole, and his guilty pleasure is anything related to dessert.