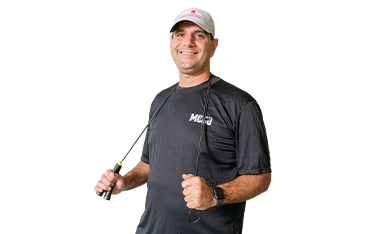 “You just have to find what works for you. Whatever it is, you have to stick to it, become obsessed with it. Once it becomes part of your routine, you’ve won. The rest will take care of itself.” – Dr. Shayan Izaddoost

With many members of his family having had heart attacks, strokes, or some other kind of cardiovascular event before age 50, Dr. Izaddoost always had it in the back of his mind that he needed to take his health seriously. When he gained a significant amount of weight during college, he turned his obsession with food into a lifelong obsession with wellness.

How did your identity become associated with food?

At some point, eating became part of my personality. Back at UT Austin during my undergrad, I would get these little personal pizzas for a buck. I would get two and eat one before class and the other during class. Then I would hit the all-you-can-eat buffet at Mr. Gatti’s. Then I’d get a shake before I went home. It was unmitigated eating 100% of the time, and people loved it. They’d buy me ice cream cones from McDonald’s and watch me just destroy them. In graduate school, I won the pie eating contest five years in a row. It became part of my identity. Even now, my patients bring me food all the time. I was known as “the big eater.” Now I’m known as “the big eater who happens to exercise a lot.”

How much weight did you gain in college and how did you lose it?

At my heaviest, I was about 320 pounds. After I got my undergraduate degree, I started to exercise. During my first year of graduate school, my anatomy partner and another friend wanted me to run the Houston Marathon with them, but I wasn’t sure if I could run at my weight. So, while they were training for the marathon, they were giving me tips they learned for beginning runners. I started running around my apartment and started dropping weight. I became obsessed with running. And when I started cutting down on my calories, the weight loss became very synergistic. I got down to about 190 pounds.

What challenges did you face during your wellness journey?

Once I started residency, it was much more difficult to have time to exercise and keep up with eating healthy. As time went on, my running decreased, my exercise decreased, and then I was just eating. Then you have life and family and all that stuff. So, my weight started fluctuating back up to around 250. I started running again more heavily, but my weight wasn’t going down because I was eating so much. I realized I couldn’t outrun my eating. That’s when I decided that if I was going to lose weight and keep it off, I would have to become obsessed with eating right and exercising.

When you say you’re obsessed with staying healthy, what do you mean?

I’m obsessed with exercise. I need to get my run in, no matter what, I have to go do it – rain, shine, hot, cold – I have to do it. The same thing with my weight. I watch my weight very closely. I know what the ranges are. I know what weight feels like what. And I’m obsessed with what I’m eating. Because as soon as I take the clamps off, then I can easily gain 10 or 20 pounds. I try to be as obsessed with it as I can so that it doesn’t get out of hand. I feel that’s the secret to it. It becomes a part of you.

Other than getting obsessed, what other weight loss tips do you have?

I think the important thing to remember is there’s no silver bullet to weight loss. It’s about knowing your limits and weaknesses and strengths. I think calorie counting is a really good way to keep track of what you’re eating so you can see where you need to adjust. I think eating fewer calories is best for your body. As far as exercise, I think one of the best things you can do is find someone you can exercise with because then it doesn’t matter what type of exercise you’re doing. You’re going to be more motivated. And always put exercise in your schedule so you don’t even have to think about it.