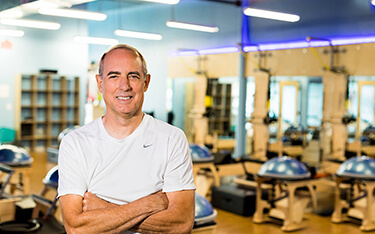 “It’s such a relief not to have pain anymore. Knowing the great outcome I had, I’d do it again in a minute!” - Ken Tyner

Ten weeks after surgery, Ken was back to normal and pain free.  Although he’s had to cross running off his list of activities, he has re-enrolled in the gym and is lifting weights and working out on the elliptical machine.

As a firefighter for 40 years, Ken Tyner has survived floor collapses, roof cave-ins, and black powder explosions. He’s pushed his body to the limit and, as he says, he’s no stranger to pain.

But when the pain in his hip got so bad that it threatened his active lifestyle, Ken knew he had to take action. That’s when he called on the experts at Kelsey-Seybold. After a total hip replacement, he’s back big time.

Ken, who retires later this year, worked his way up the fire department ranks, with stints in the field, training cadets at the academy, and eventually serving as chief. He’s always gone pedal to the metal when it comes to fitness.

“I just wore my hip out,” he said. “I ran 5 miles each morning when I was training cadets, and I went to the gym almost every day to lift weights and run on the treadmill. And firefighting is pretty physical work to say the least.”

Like a lot of people, Ken tried to ignore, and push through, the pain at first. But when that didn’t work, he talked to his Kelsey-Seybold primary care physician, Dr. Cherice Conley-Harvey. She tried physical therapy and cortisone shots, but nothing helped.

“Within five minutes, Dr. Cahill knew what the problem was,” he said. “She looked at my X-ray, wiggled my leg a bit and said we could do surgery whenever I was ready. I said, ‘I’m ready. Let’s do it as soon as possible.’ ”

The surgery went well; there were no complications. Ken was back in his hospital room an hour later.

“Later that day, a physical therapist had me walk two laps around the room,” he said. “The next day I did four laps. He was surprised and said most people can do only a quarter to a half lap.”

Ken went home the next day. He said his hip felt better immediately after surgery, but he took pain pills for a couple of weeks for discomfort caused by the incision through the glute muscles.

Moving toward the next phase

Soon after surgery, Ken noticed a new Pilates studio close to his house. When he went for his  six-weeks post-surgical checkup, he got permission from Dr. Cahill to give it a try.

“Pilates is all about the core,” he says. “After the surgery, I felt like I needed to restretch and strengthen my glute muscles on the side where I had surgery. I wanted to be sure they didn’t scar over.”

Ten weeks after surgery, Ken was back to normal and pain free. Although he’s had to cross running off his list of activities, he has re-enrolled in the gym and is lifting weights and working out on the elliptical machine. In addition, he chases after his 2-year-old grandson, ticks off jobs on his honey-do list, and works in the yard.

“It’s such a relief not to have pain anymore,” he said. “I was very impressed with Dr. Cahill. She’s knowledgeable and professional, with a pleasant manner. Knowing the great outcome I had, I’d do it again in a minute!”